Today's school is not suitable for today's children - can a critical mass of parents demanding change created?

The European Federation of Conflict Management and Treatment in Education and Care (EFeCT) held Badkid, its 7th International Meeting in Budapest. I had the opportunity to participate at the event and initiate an open space discussion on the topic „What can be done to change perceptions and systems to prove most ’badkids’ are actually ’goodkids’? The lively discussion raised a few good ideas.


The participants of the event were mainly professionals dealing with children bearing a SEN-laben (Special Education Need). In the discussion group we have agreed that there is a very interesting situation now. Even a few years back only a very low percentage of children were considered SEN, but today there is a critical mass, at least over 20% of children simply do not fit in traditional schools.
There is a lot of scientific evidence that children of today and school of the last century are simply not compatible, but policy makers do not seem to notice it. One of the ideas raised was that we have to make scientific evidence a strong case, but not only on itself, but also financially as this is the language policy makers usually understand. We have agreed that is also important to change teacher training, but we did not agree whether a different type of training is destined to change teaching or good innovative methods will slowly get into training after they made a change on small scale. There was an agreement on the importance of positive feedback – both professional and public – to those who do good.

We have discussed how committed professionals and parents raise the awareness of the general public. We seem to meet a typical behaviour every day: parents tend to accept schools that are a waste of time or straightforward unsuitable for their children remembering their own school years that were also boring and useless, but the children must bear it as they have survived themselves. We were trying to find some key idea on how we can make parents notice that this is not necessary, but school years can actually be useful and fun. The participants came to the conclusion that use of a simple language is key as well as playing on feelings instead of logics. Good experiences can be spread using grapevines, local and wider, and it will hopefully result on substantial upscaling of methods that work. In times when most people are consumers in the traditional meaning of the word, one suggestion was to build a strong brand of modern school and 'simply' sell it to parents.

The organiser of the event, the European Federation of Conflict Management and Treatment in Education and Care (EFeCT), founded in November 2007, is vested in Ghent, Belgium.  EFeCT is a network of organizations and individuals who believe in strength based programs for working with young people; they have a particular interest in the Life Space Crisis Intervention model and the work of Reclaiming Youth International.  EFeCT currently has members from 8 European countries: the Netherlands, Germany, Scotland, Norway, Portugal, Belgium, Romania and Hungary.  The main goal of EFeCT is to gather and discuss critically the information and scientific studies about methodologies in conflict management.  The population they wish to delineate consists of children and youths who display disruptive behaviour.  Together they aim to promote strength based approaches and to further the interventions with troubled and troubling youths that empower them and allow them to become satisfied and productive citizens. Every year the EFeCT group gathers in a different country to address the most relevant issues in the field.

EFeCT and EPA is considering possible joint projects in the future.
Posted by Paddington at 8:40 PM No comments:

Not every European is digital just yet. But we’re getting there. Thousands of community telecentres get people online and on jobs across Europe. We celebrate their work in the last week of March every year, by organizing European Get Online Week (GOW) – to empower a digital Europe.
On 23-29 March 2015, Europe is invited to enter a digital world full of benefits. With 20% Europeans still offline and with 39% of the EU workforce lacking proper digital skills[1], the campaign partners have much to do, especially looking at the hundreds of thousands of digital jobs available on the labour market. The equation is simple. Get those 20% online and get those 39% aware and ready to take the available digital jobs.

The Annual Lecture of SPTC was given by an old friend of EPA. On 3 March parents, teachers and educational stakeholders gathered at Glasgow Science Centre to hear from Dr Joyce Epstein, a researcher and leader in the world of education and parental involvement, based at Johns Hopkins University in Baltimore. You can listen to the whole lecture at this link.

Read more »
Posted by Paddington at 8:57 PM No comments:

In October 2014, the EU Alliance for Investing in Children, which brings together 24 European networks sharing a commitment to end child poverty and to promote children’s rights and child well-being, responded to the public consultation on the Europe 2020 Strategy. In its response, the EU Alliance argued that the Europe 2020 strategy is potentially the main tool to realise the European Commission Recommendation Investing in Children – Breaking the Cycle of Disadvantage(ii). The Recommendation is a commitment endorsed by Member States calling for concerted efforts to end child poverty and promote child well-being across Europe.

Following the publication of the new Europe 2020 Integrated Guidelines COM (2015) 98 & 99 on 2 March 2015, we want to highlight our concern and reiterate our messages.

Yes, we are convinced that you can teach entrepreneurship and the entrepreneurial mindset. Entrepreneurship is all about attitudes, skills and competences. - says Friederike Sözen in her guest article about ESP.
Read more »
Posted by Paddington at 10:03 AM No comments:

EUCIS-LLL, the European Association for the Education of Adults (EAEA) and EPA are organising a policy debate on intergenerational learning in Brussels, on 31 March 2015. The event will be hosted by MEP Heinz Becker and supported by Goodyear.
Read more »
Posted by Paddington at 7:37 PM No comments:

On 8 March the International Women’s Day took place, highlighting progress all over the world in reaching equality for women's social, economic and political participation. This year the UN theme “Empowering Women - Empowering Humanity: Picture It!" envisions a world where each woman and girl can exercise her choices, such as participating in politics, getting an education, having an income, and living in societies free from violence and discrimination. On the 20th anniversary of Beijing Platform for Action facts show that there is still a long road ahead to reach those goals. EUCIS-LLL thus calls for a greater attention to gender equality notably by mainstreaming it in lifelong learning strategies in order to empower girls and women and build more prosperous and fairer societies.
Read more »
Posted by Paddington at 7:57 PM 2 comments:

Conference in Barcelona on using mobile technology in education 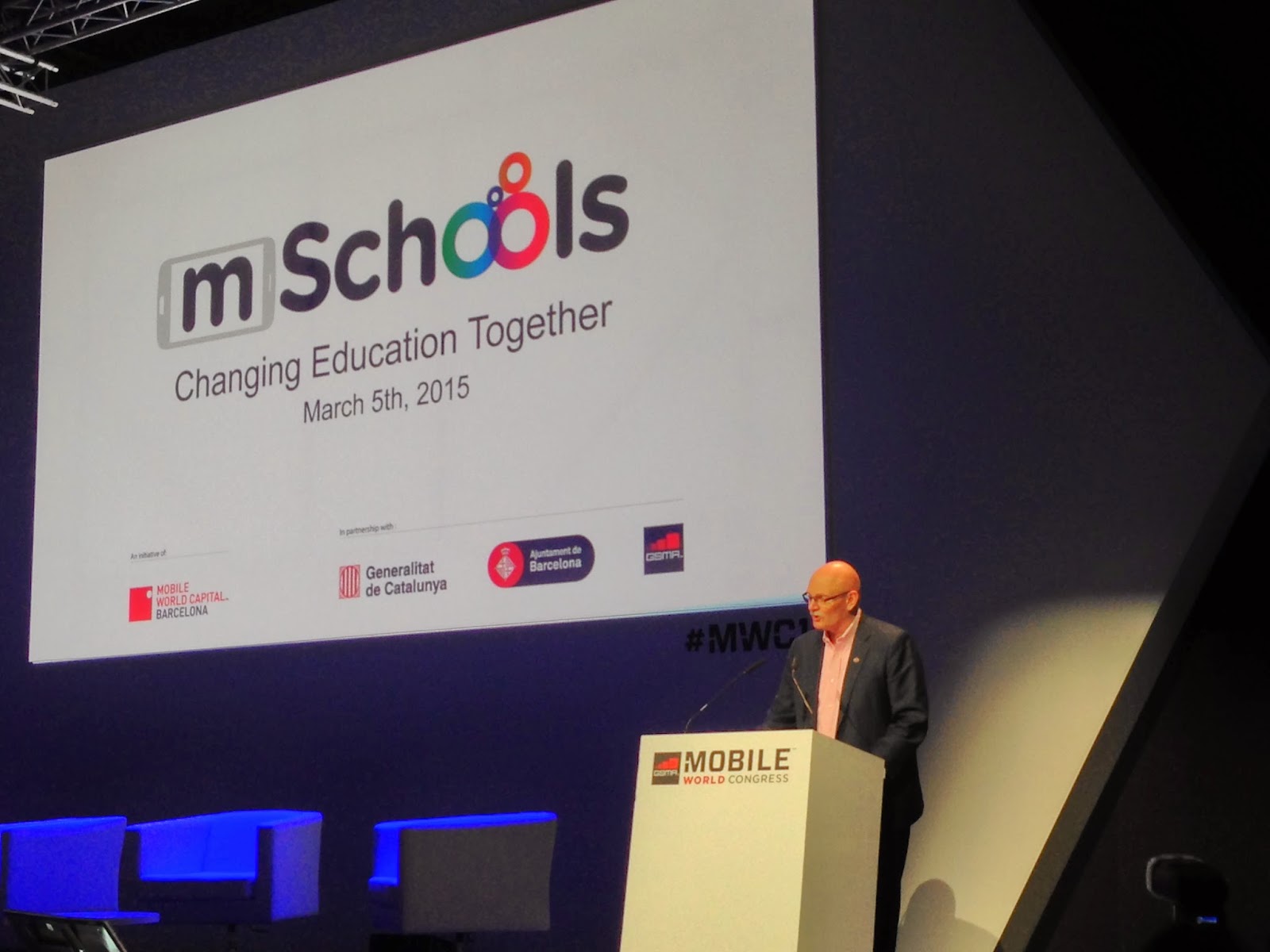 Changing Education Together Conference, part of  the “mSchools” program promoted by GSMA was held on 5th March 2015 within the framework of Mobile World Congress in Barcelona. More than 500 school principals have pondered the incorporation of mobile technology in the classroom of Catalonian Schools. There are more than 400 different examples that are already functioning. EPA was represented at the event by Josep Manuel Prats, Vice President of EPA, President of Fapel (Spain, Catalonia).
Read more »
Posted by Paddington at 5:53 AM 2 comments:

A recent PISA publication by OECD is exploring gender equality in education with special focus on STEM education (science, technology, engineering and mathematics). An infographics shows the most significant and eye-caching facts calling the attention of the readers to the fact that more boys are underachievers in mathematics and science than girls while girls have much less confidence in themselves in this field. For parents the most important findings show that traditional gender roles have a very high effect on parents' view and girls are not often encouraged to find their careers in STEM. It is time for parents to face realities are reconsider the way they guide their children towards their future careers.

Read more »
Posted by Paddington at 9:44 PM No comments:

One of the main EPA policy documents highlighting the issues European parents are facing is the Leave of Absence manifesto, dating back to 2009. In this document there are two areas covered in relation to reconciling work and family life, namely

Read more »
Posted by Paddington at 2:51 PM No comments:

European-level initiatives for schools can too easily remain unknown, inaccessible or uninteresting for teachers and other education professionals. A new website, the School Education Gateway, shall provide clear information on education initiatives across Europe. The website is aimed primarily at teachers and school staff, as well as education sector experts and organisations.

The European Institute of Public Administration has recently made available some material delivered during recent training sessions organised by the European Commission . The training was designed for national administrators who are currently working on developing implementation strategies for theRecommendation 'Investing in children - breaking the cycle of disadvantage'. This builds on the training seminars held throughout Europe over the past months, notably in Athens in May 2014, and in Italy in March 2014.

Read more »
Posted by Paddington at 8:32 PM No comments:

On 26 February 2015, the European Commission published a series of country-specific documents as the next step in the 2015 European Semester cycle. As three headline targets concern children and young people, the reports explore the situation in the field of early school leaving, participation in tertiary education, youth unemployment and child poverty country-by-country.
Read more »
Posted by Paddington at 8:29 PM No comments:

Listen to the Voice of Children - Why do we have to change education?

On 27 February EPA's president participated at the Voice of Children – from communication to self-expression - Conference organised by Butterflywise and the Alliance forChildhood. While we had the opportunity to learn a lot about the way Butterflywise’s education system works, we could also learn a lot from the introductory speech of Christopher Clouder on how much we can learn from our children and how important play and playfulness are for their education. Noemi Paymal, a world-known anthropologist presented her Pedagooogia 3000 initiative and emphasised the need to change schools nearly fully to meet the needs and potential of the new generations that is proven to be a next phase in the evolution of mankind.
Read more »
Posted by Paddington at 5:53 PM No comments:

Report on the January session of the INGO Conference

At the session of 26-29 January, the INGOs Conference of the Council of Europe, elected its new board and an expert on gender equality. The Conference held a debate and adopted a resolution following the terrorist attacks in Paris. The Conference organized a visit of a group of Ukrainian NGOs to discuss the implementation of the strategic priorities for the promotion of civil participation in decision making in Ukraine and adopted a resolution on "civil society, peace and democracy in Ukraine. The Conference welcomed a delegation of the Ministry of Relations with Parliament and Civil Society of the Kingdom of Morocco for an exchange of views on possible future cooperation.
Read more »
Posted by Paddington at 2:59 PM No comments: