Over 80 participants from more than 25 countries celebrated the 30th anniversary of EPA in Luxembourg on 27&28th November. It was a great pleasure to welcome four former Presidents at the event as well as representatives of the Council of Europe, Luxembourgish Presidency of the EU and our precious partners, including the European School Heads Association (ESHA), the European Schoolnet, the WISHES Network and the Austrian Chamber of Commerce. The main findings of two EPA surveys, one on school cost and one on the state of play in the field of parental and student involvement, conducted in the summer and autumn were presented. A flagship policy document corresponding the mid-term working programme of EPA was also launched at the conference.

The venue of the whole event was Lycée Aline Mayrich, an exceptional public school. Participants had the opportunity to visit the school and get an in-depth introduction to their ways of working. It is a very well-equipped school, preparing children for the challenges of the 21st century, offering a wide choice of courses and activities.

At the opening of the conference the message of the Minister of Education, Families and Youth was delivered. Sabine Rohmann, the Chair of the Education and Culture Committee of the INGO Conference at the Council of Europe reminded the participants of the responsibility of parents in the present refugee crisis and in the aftermath of the Paris attacks. She also called everybody to demand quality education for all children in Europe. 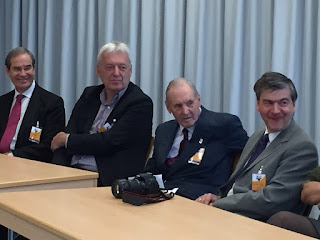 Four former Presidents (Diego Barroso, Werner van Katwijk, Mario Viscovi and Johannes Theiner - left to right in the photo), as well as former Vice Presidents (Michéle Retter, Brigitte Haider and Leopold de Callatay)  took place in the celebratory panel discussion following the opening. They shared their memories, most difficult and funniest moments, and gave advice to the present generations. Participants were reminded of difficult times, especially financially, but also the fact that EPA has always been strong and its members committed enough to rescue the only voice of parents in Europe.

Arriving to the present, we had an thorough look at the results of the two recent EPA surveys. The results on school costs clearly show that in spite of the obligation of offering free education in the EU, schools are far from free in different EU countries. While school books are often free, compulsory stationery and workbooks are often paid by the parents, while in all countries compulsory equipment for PE is paid by the parents. The picture about parental involvement in decision making in education is rather gloomy. Reviewing the results on the survey we can see that decision makers are still rarely obliged to involve parents, and the same applies to involving the learners, meaning Europe is far from applying the school leadership approach. We can also say that empowerment of parents’ representatives is also necessary, as even compulsory involvement is often only a formality and not substantial in most countries.

After the launch of our new policy document, Manifesto 2015 of European Parents for a European future of our children in the 21st century, there was a great and honest discussion about  current topics, with the possibility to continue during dinner and at workshops on the following day. 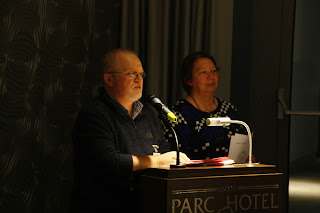 The day finished with the gala dinner and the ALCUIN Award ceremony. This year’s winner is Gathered Together (Cruinn Còmhla), a project developed to address the issue of low levels of participation and inclusion in school communities of parents from different ethnic and cultural minorities in Scotland taking a twin track approach. The team works directly with parents and carers from all ethnic and cultural backgrounds, finding out about their experiences of involvement with their children’s school and education, and barriers they experience.  Gathered Together also offers training for Parent Councils and teachers wanting to engage with all parents, raising awareness of the barriers that ethnic minority parents can face to involvement, exploring equalities legislation, practice and practical steps to promote parental participation.

The second day of the conference started with keynote presentations, one on Multilingualism in Luxembourg by Prof. Jean-Jacques Weber from the University of Luxembourg, and another one on the  importance and means of cooperation between parents and school heads with special focus on well-being and the mental health of all parties by Chris Harrison, Secretary General of the European School Heads Association. 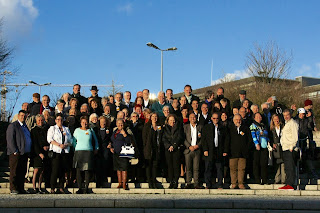 The rest of the conference was spent on interactive workshops. Before lunch two workshops followed up on the topics of the above keynotes and a third one reviewed the present situation with special emphasis on the influx of refugees and the need to live a normal, fearless life after the Paris attacks. The second round of workshops tackled the topics in the new policy document, active citizenship and participation, supporting parenting, reconciliation of work and family life, and digital literacy. Workshop background material and reports are being uploaded here as we are receiving them from the rapporteurs.

The event finished with the scheduled general assembly, deciding on the 2016 working programme and budget of EPA. It was decided that there will be a revival of the European Day of Families and Schools in October 2016 and that it will be a thematic day, on a topic decided on in April, at the next GA. Input from the readers is very welcome commenting on this article.

A colourful booklet was published for the event that can be read following this link.