Refugee and Migrant Children and Parents


The refugee-crisis in Europe revealed some problems that were already very serious in our society, yet because of the lack of media attention they were not handled properly. Although the topic is very much trending, there are some issues that are especially important talking about migrant or refugee children and their parents, and where the parental organizations could help.

OECD published a review about immigrant students at school, where they would like to present the difficulties and challenges the refugee or migrant children, their parents and teachers have to face.
http://www.keepeek.com/Digital-Asset-Management/oecd/education/immigrant-students-at-school_9789264249509-en#page1

According to the latest data published by UNICEF, 60% of the asylum seekers coming through the Greek-Macedonian border were women or children in January 2016.
http://www.unicef.org/media/media_90000.html

The UN Convention of the Rights of Child declares, that every child deserves positive discrimination, irrespective of their colour, race, nationality, sex, language, religion, political or other opinion, ethnic or social origin, property, disability, birth or other status (including being a refugee). The document reveals the extra needs and rights of refugee and migrant children (Articles 22, 29, 30, 39, 40):
- they are not to be separated from their parents or be detained
- they are to be offered protection and humanitarian assistance, regardless their being accompanied by their parents or not,
- they are to be offered free interpretation services during any procedure involving them,
- all possible efforts are to be taken to find the parents of unaccompanied children and reunite them,
- offer unaccompanied children the same protection as children with no parents in the receiving country,
- offer them appropriate education, taking into account their abilities, eg. level of knowledge of majority language,
- the cultural identity, language and the values of the country of origin are to be respected and supported to develop
- they are to be supported to become citizens with a spirit of tolerance and equity of all people, that might be somewhat difficult to balance when protecting identity in the first place
- they have the right to attend school established according to the above
- they have the right to their minority culture, religion, practice, even in majority schools,
- they have the right to be offered extra help if they are victims of armed conflicts, neglect or inhuman treatment. 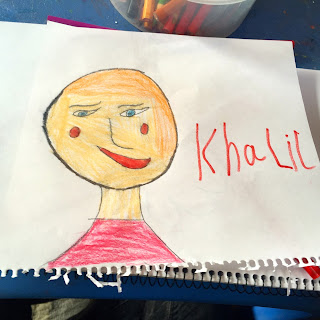 Self portrait made by a 6-year-old Iranian boy, Khalil at the Macedonian-Greek border, in November 2015, where he spent 10 days with his family in a tent

Unfortunately, there are still 11 Council of Europe member states which have “conditional safeguards which do not provide full protection against child statelessness”.
http://assembly.coe.int/nw/xml/News/News-View-EN.asp?newsid=6006&lang=2

There are some programs all around in Europe, that found a very innovative and efficient way to help these people to integrate.

The SIRIUS Network is establishing a partnership between seven countries to address inadequate access to quality education for asylum-seeking and refugee youth throughout the European Union.
http://www.sirius-migrationeducation.org/

In Ireland the National Parents Council Primary won the ALCUIN Award for its work with Migrant Parents. In their program they work with the parents to achieve the best result in helping the children.
http://www.npc.ie/news-post.aspx?contentid=488

The INCLUDED nonprofit organization works since 2006 in difficult places, particularly the slums where migrants are crowded into margins of big cities.
http://included.org/

In Austria The Public Employment Service Austria (AMS) made a research, and they realized that a very high percentage of refugees are highly educated. The competency check help them to enter the job market according to their degree.
http://derstandard.at/2000028899170/AMS-Kompetenzcheck-Syrer-besser-gebildet-als-Oesterreicher

In December 2015 the National Parents’ Committee for Primary and Secondary Education (Norwegian abbreviation FUG) posted a letter to the all local Parents’ Committees in all primary schools in Norway. FUG was asking them to take actions regarding welcoming parents who is asylum seekers to Norway and their children.

In the letter FUG was also concerned about child poverty. It is important that both the schools and the local Parents’ Committees remember that the asylum seekers is poor when they are planning activities in connection to school. ( In Norway public schools is free and it is forbidden to ask the parents to pay for activities in schools).

UniPID has launched a project titled Supporting Immigrants in Higher Education in Finland (SIMHE), which is funded by the Ministry of Education and Culture (MEC). SIMHE acts as a pilot project for MEC`s national initiative to reinforce the role of Finnish Higher Education Institutions (HEIs) in supporting the integration of asylum seekers, refugees and other immigrants. The project co-operates with a simultaneous pilot project of Metropolia University of Applied Sciences. In the first phase of the project, the services offered by SIMHE are mainly aimed at asylum seekers.