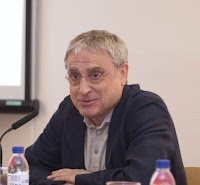 Professor Ramon Flecha (CREA, University of Barcelona) gave a Quality of Childhood talk on 8 November in the European Parliament on scientifically evidenced methods to empower parents to become more successful educators. This was a major event for EPA to raise awareness of the importance of empowering parents, and also to raise awareness about EPA among MEPs. The event was hosted by MEP István Újhelyi (S&D, Hungary, member of the Lifelong Learning Interest Group of the EP). It was the 61st talk, the first ever to be co-hosted by EPA, and has been for 2 years in the pipeline.

Our host MEP Újhelyi called the attention of the audience, including professionals as well as people from the EP, to the importance of investing in children and empowering parents as part of this investment. To invest in an equitable way can not only decrease child poverty at present, but also help preventing the recreation of poverty of forthcoming generations.

Ramon Flecha promised the audience to focus on solutions, ones that has been scientifically proven to work. By this he meant solid and unchallenged evidence, published in major scientific journals, widely read and not questioned by professionals. This approach does not leave room for opinion, but pure experience.

Professor Flecha, the former leader of the Include-ED project, introduced the methodology of Successful Educational Action, a group of methods that have proven to be successful regardless the context. The first action introduced was inviting a family member to the classroom who helps achieving success for everybody instead of choosing a group within the class who will succeed and leaving all others behind since the teacher alone is not enough to help everybody to success, as it is usual in traditional classroom settings. In some schools parents are allowed in their own children’s class, in some others not, but there is no difference in the results.

The most discussed method introduced was Dialogic Literary Gatherings. In the framework of this people are assigned to read some of the most prestigious pieces of world literature and discuss it. Emotional learning is an important element of this, and it leads to a deeper interest and involvement in the learning of children. High quality literature has a direct effect on the brain, helping to multiply internal connection, leading to more complex thinking. The audience was genuinely surprised by the experience that people lacking education and sometimes linguistic skills do read Shakespeare, Chaucer and similar authors and are able to discuss them among themselves.

Professor Flecha also highlighted the necessity for universal scientific literacy meaning that all discoveries should be available for all in 10 days. It means on the one hand that you don’t have to go to university or other formal education institutions to learn, but also means parents and children open to learning this way, using the internet, may be way ahead of ignorant teachers and obviously of school text books.

Another aspect that is taken into account in the case of all EU-funded projects, and a fair approach to social investment, is to measure social impact, also in the case of all innovation and investment targeting children. Parents in general have a crucial role in achieving this social impact, according to Ramon Flecha, but also in evaluating it in all cases. In the case of education finding the right methodology is not only the role of teachers anymore, but of the whole community, especially more and more of the parents. It is a universal experience that parents who may not show up for meetings are still happy to be part of it, to actually go into the classroom. In any problematic environment the approach proven to be successful is respect, leading to trust and thus success. It is important to mention that this way impact includes improvements in teacher health, too.

Such an approach will lead to a dialogic inclusion contract, not only to improve one aspect of the life of children, for example education, but also health, housing and participation, etc. To conclude with, Professor Flecha called the attention to the fact that values only change through action, so it is necessary to go beyond discourse. 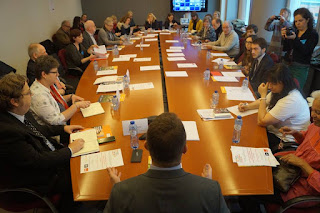 Ramon Flecha is Professor of Sociology at the University of Barcelona and Doctor Honoris Causa from West University of Timişoara. His research stands out for their joint impact in the scientific, political and social domains, with projects like WORKALO (FP5) and INCLUD-ED (FP6). The results have been published in a book by Springer and in 112 articles in Journal Citation Reports’ journals, one of them awarded the Best Paper Prize 2013 of the Cambridge Journal of Education, being the most read paper in the history of the journal. He has also published in journals such as Organization, Qualitative Inquiry, Current Sociology, Harvard Educational Review, Journal of Mixed Methods Research and, in Nature, about the first worldwide repository (SIOR) on social impact that he has created as director of IMPACT-EV (FP7) funded to develop a system and indicators to evaluate and monitor the impacts from research in the Social Sciences and the Humanities for the European Commission. In May 2016 he has been elected Chair of Expert Group on Evaluation Methodologies for the Interim and Ex-post evaluations of Horizon 2020.