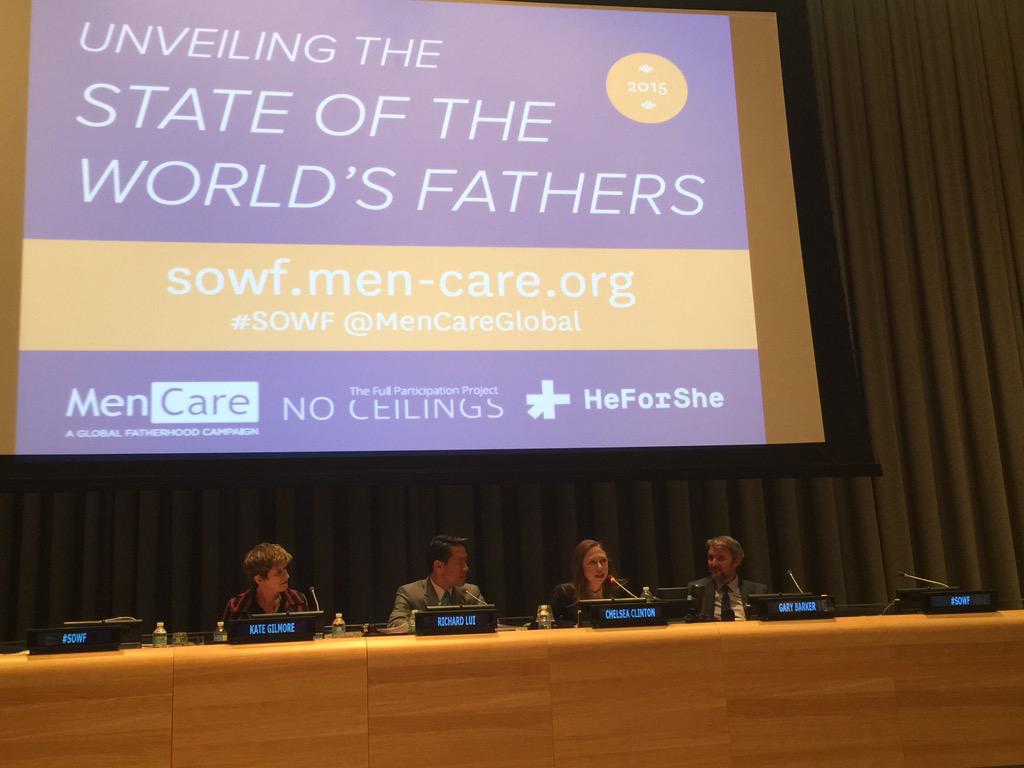 The first-ever State of the World’s Fathers (SOWF) report has been presented today at the European Parliament under the framework of the global MenCare fatherhood campaign at a roundtable discussion organised by the S&D Group and Make Mothers Matter. This report is a landmark analysis of fatherhood that draws evidence from hundreds of studies covering all countries in the world with available data.

The SOWF report is intended to provide a periodic, data-driven snapshot of the state of men’s contributions to parenting and care giving globally by addressing four issues related to fatherhood: unpaid care work in the home; maternal, newborn, and child health and sexual and reproductive health and rights; men’s care giving and violence against children and women; and child development.

Some of the key findings of the SOWF report:
1.       Fathers with close connections to their children live longer, have fewer health problems, are more productive and generally happier.
2.       Moreover, fathers matter deeply to the development of their children and targeting them is key in achieving gender equality.
3.       More information about the benefits of fatherhood for men, women and children – specifically, research on what children need to thrive – is urgently needed and could prove instrumental in guiding effective policy changes.

“This first State of the World’s Fathers report reaffirms that fathers matter for children and that care giving is good for fathers,” says Gary Barker, SOWF report author and International Director, Promundo.

The SOWF report reveals long-lasting disparities. Women continue to spend between 2 to 10 times longer than men caring for a child (or older person). These inequalities persist despite the fact that women today make up 40% of the formal global workforce and 50% of the world’s food producers. While it is increasing, men’s unpaid care giving has not kept pace with women’s participation in the labor force.

There is no country in the world where men and boys share the unpaid domestic and care work equally with women and girls. As a consequence, women lose opportunities for work and income, and girls are often held back from educational opportunities, which exacerbates gender inequality and gendered poverty. A lack of supportive policies, particularly paternity leave for new fathers, is part of the problem. While maternity leave is now offered in nearly all countries, only 92 countries offer leave that can be taken by new fathers; in half of these, the leave is less than three weeks.

“MMM welcomes the SOWF report as a major step towards the recognition of unpaid family care work traditionally performed by mothers. Gender equality will never be achieved if the care activity is not shared, valued and recognized as a mothers’ and fathers’ contribution to society,” says Anne-Claire de Liedekerke President of Make Mothers Matter. “We are looking forward to collaborate with MenCare and to promote the role of fathers due to the positive effects on children’s development and education, on mothers and on fathers.”

Paid and non-transferable leave policies for fathers, when well designed, have the potential to increase men’s participation in caregiving. In the United Kingdom, fathers who took leave after birth were 19% more likely to participate in feedings and to get up with the baby at night 8 to 12 months later, as compared with those who did not take leave. A study from Sweden showed that every

month that fathers took paternity leave increased the mother’s income by 6.7%, as measured 4 years later, which was more than she lost by taking parental leave herself.

"Fathers have everything to win by taking care of their children, from every point of view. Member States in particular need to support the S&D group in its will to create a paternity leave of at least 10 days fully paid and to improve the use of the parental leave," says Marie Arena, S&D coordinator of the Women's rights and gender equality Committee and rapporteur for the Maternity Leave Directive.

“When fathers take on their fair share of the unpaid care work, it can alter the nature of the relationships between men and women and children, as both fathers and mothers will have more time for their children, women are released from some of their ‘double burden,’ and fathers get to experience the joys, satisfactions, and stresses of caring for their children,” says Nikki van der Gaag, feminist and SOWF report author.