A parent will do anything that is for the child, even vote at EP elections – message by Martin Schultz 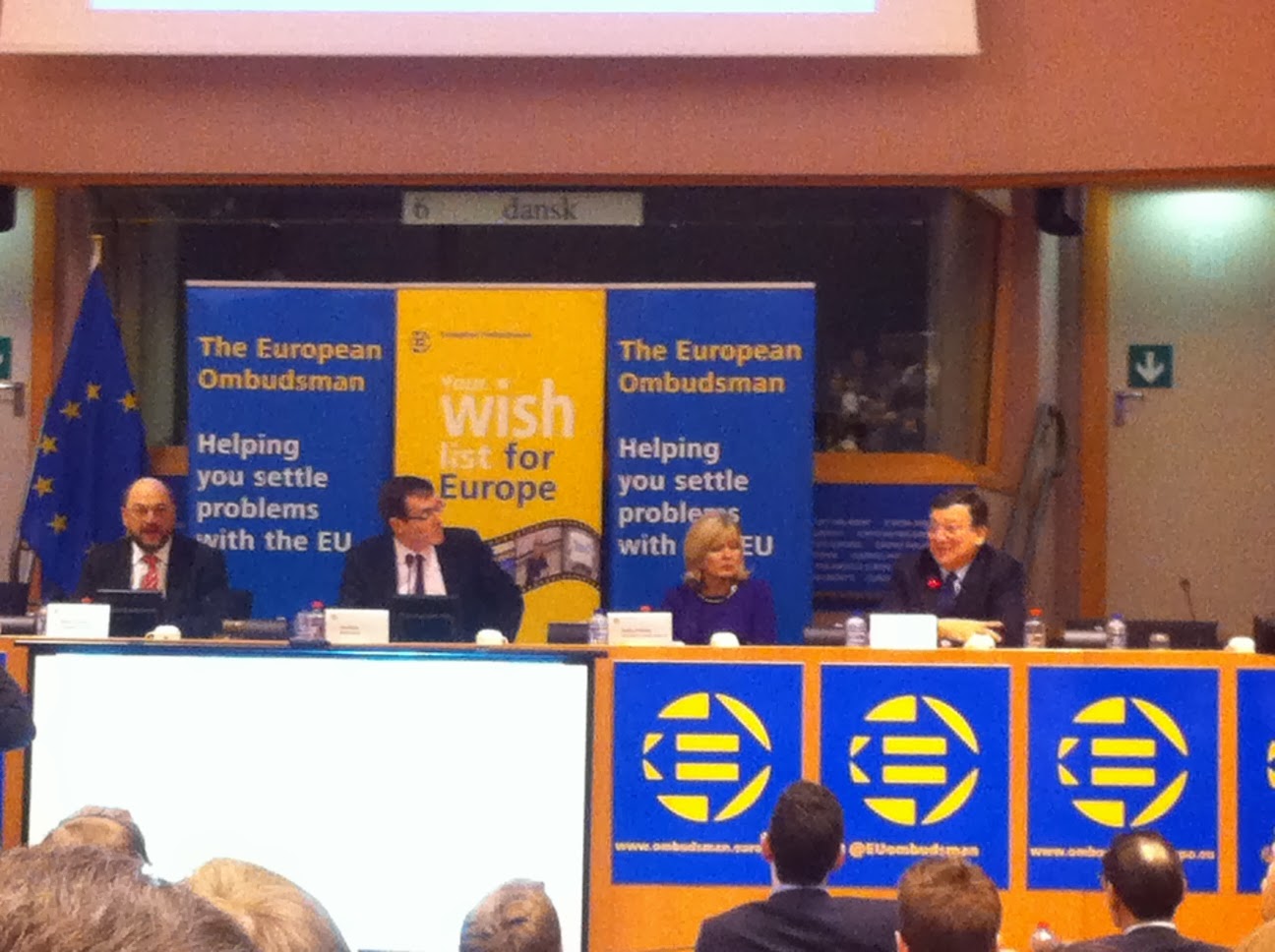 Emily O’Riley, the new European Ombudsman hosted an interactive event on 4th March inviting citizens and European organisations to put items on the EU-wishlist, issues to deal with during the campaign for EU elections and in the next European Parliamentary period. She was joined by José Manuel Barroso, the president of the European Commission and Martin Schultz, the president of the European Parliament, candidate elect for EC presidency by the European Socialists. Reacting to EPA contribution Mr. Schultz agreed on the importance of calling out to parents with policy messages that supports the future of children on family level to raise awareness.


In the framework of this really interactive event - while we learnt that in Swedish the word Ombudsman is a gender neutral phrase - the participants raised a number of burning issues including youth unemployment, the effect of the economic crisis, immigration, minorities, enlargement, mobility and even the Ukrainian crisis. Still the most deliberated topic was the democratic deficit as well as the mistrust and ignorance towards EU institutions.
Both Mr. Barroso and Mr. Schultz articulated their wish to stop the ‘blame game’ namely nationalising successes and europeanising failure. It means that when there is a decision on EU-level that is favourable for a given country or goverment, the respective prime ministers and governments communicate it as a personal success of national politicians while an unfavourable decision is communicated as a result of incompetence of European institutions. The importance of the core policy of subsidiarity was also emphasised, especially in the context of building trust towards the EU should be accompanied by building trust towards national institutions as well as not waiting for solutions from the EU for all problems.
The democratic deficit is likely to result in a very peculiar European Parliament. One expert offered their research results that at the moment they measure that 29% of seats at the EP will be taken by Euro-sceptic or anti-EU MEP’s. This ratio may even be higher as the German decision to abolish a threshold at elections is likely to favour these kinds of parties.
One instrument to increase trust was identified to be forcing everybody taking part in stakeholder involvement activities to register at the Transparency Register EPA has already subscribed to. Answering a question on transparency Ms. O’Riley touched the delicacy of transparency especially when there is a heavy political discussion going on, but concluded that because of the democratic deficit it is necessary.
She also highlighted the importance of having some kind of a positive personal experience with the EU to have a positive attitude towards the Union.
Mr. Schultz emphasised the peculiarity of the campaign on the forthcoming EU elections, namely that institutions are trying to send messages on the importance of vote linked to the importance of EU institutions. The same kind of mobilisation on national level would be rather strange.
There was the possibility to raise the voice of parents at the event reacting to this. I was asking for messages towards parents on what MEP candidates and their European political groups would do for the future of children as parents and grandparents, about 60-70% of all voters according to my wild guess would be ready to act and go to the polls for their own children. At the same time it is very important to formulate the messages so that a voting parents can really understand how the planned policy measures effect their personal efforts to raise their children and not only to learn about some general concepts.
Martin Schultz answered me by quoting the example of his own parents in the post-war period when financial support was not available for families. He emphasised that all people are ready to follow a lead and even to sacrifice if it is for the future of their own children. In my interpretation he underlined my argument very heavily.


I’m looking forward to the messages of MEP candidates as well as EC President Candidates that can be forwarded to parents so that they feel their vote will affect the lives of their children by influencing EU politics. While as the only representative of parents on EU-level EPA we are well aware of the importance of the forthcoming EU elections, the only way to forward this message to grassroot parents is to disseminate the plans of political groups that influence the lives of different parents. As parents is probably the most heterogeneous group of people in the world with different needs and issues, I hope diverse political groups will have a colourful palette of issues that parents can choose from.
Eszter Salamon
president
EPA
Posted by Paddington at 4:32 PM