The digital revolution pushes offline education to change at last

The Lifelong Learning Platform (LLL-P, former EUCIS-LLL) held its annual conference, Education in a Digital World, in Tallinn, Estonia on 31 May-1 June. Eszter Salamon, President of EPA and Vice President of LLL-P represented parents at the event. The conference was dealing with not only burning issues around digital technology in education, but could also tackled the wider effects, how technology and information in our lives affect education in general. To underline the complexity of the topic LLL-P has decided to postpone the finalisation and publication of their major position paper originally planned to be published at the conference, and to include outcomes of discussions at the event as well as further members’ input in it.


On the first day both the outgoing Maltese and the incoming Estonian EU presidencies were represented, and both representatives presented their commitment and input in the field, especially focusing on the narrower topic, digitalisation in education and digital skills for the labour market. Their presence highlighted both the importance of the topic and their acknowledgement of LLL-P as the platform representing education stakeholders from formal, non-formal and informal education.

Mart Laanpere, a Senior Researcher from Tallinn University helped participants to understand the Estonian educational landscape, a sector and country being ahead of most of Europe in both modernisation and digitalisation. His keynote, The Digital Ear Will Be a Lifelong Learning Era or It Will Not Be has also catalogued a number of controversies in the field of digitalisation. He quoted Michael Huberman’s 1980 article ‘Recipes for Busy Kitchens’ claiming that ‘educational innovation tend to spend too much time on the spectacular at the expense of fundamental’, and warned the audience against this with regards to education in a digital world.

His most important message was that there is a changing need of students and changing roles of both educators and learners as a result of digital technology being wide-spread. Although we had a little debate on whether digital technology is fundamental condition of this changed situation or not, one thing we had agreed on: the digital revolution has led to a fundamental change in education, a shift from old pedagogy to a new one. He quoted Michael Fullan (2013) on this. 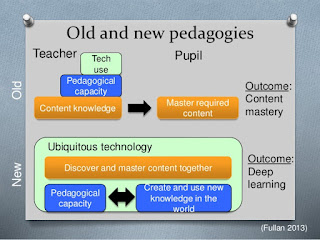 In old pedagogy, the teacher had content knowledge and pedagogical capacity as well as the direct access to technology (eg. operating overhead projectors). In this paradigm, the teacher is likely not to have enough knowledge about technology and needs assistance that is also provided by the school. The role of the learner is to master acquired content, and content mastering is acknowledged as positive learning outcome.

With information being readily available for all, and young generations being often more comfortable using digital technology, the roles have changed fundamentally leading to a new pedagogy. In this new paradigm, most of the pedagogical capacity is still with the teachers, but the learners also need to acquire some (to be able to instruct teachers in technology use). The main role of learners is to create and use new knowledge. The educational process has become a more equal one, where teacher and learner discover and master content together, with the process leading to a different outcome, deep learning.

In his keynote on the second day Steven Stegers, Programme Director of Euroclio talked about Gaming and Learning. He also underlined the importance of defining the desired learning outcomes well. Most formal education providers are still focusing on test-ready knowledge, while the desired result of education should rather be complex learning. He introduced his topic by quoting Assassin’s Creed and Call of Duty, two games widely played by young people, as very useful tools for history teaching in case there is guidance accompanying it. He showed the audience a number of freely available and attractive tools both by Euroclio itself as well as other sources and developers. In an overwhelmingly wide offer he underlined the importance of choosing the right ones and not to leave choice entirely to the market and marketing.

He highlighted one advantage of using games if they are designed well. In usual classroom settings school often increases already existing time pressure by preferring quick answers to ones based on contemplation and being really right. Although lots of games with educational value are war-related, they often include a need for strategic thinking and cooperation that counter-balances instant answer demands of traditional classroom education.

There was a discussion after his presentation on copyright and the possibility of free use for education. From a parents’ point of view this topic is closely related to the recognition of parents as the primary educators, as it implies free use by parents as educators, too. At the same time, this would need a fundamental revision of copyright laws: ensuring free educational use in all education environments, formal, non-formal, informal, may need a totally different approach to intellectual property and its remuneration.

The keynote was followed by breakout sessions on the second day. Ilse Mariën from the Free University of Brussels (VUB) presented her research on digital inclusion at the session moderated by me. In this very interactive session the audience was invited to find barriers of digital inclusion. She presented her research using diverse indicators on digital inclusion, as well as its outcomes, 8 profiles of people with different levels of inclusion or exclusion as a result of circumstances or their own decision. This is a range from digital outcasts to digitally self-excluded at the two low ends and smoothly digital, digital all-stars and unexpected digital masters in the middle.

VUB is in the final stage of developing a self-assessment tool, that will be available before the end of the summer. We will share its link when ready. The tool is designed to be used for self-reflection as well as providing a basis for e-inclusion policies by municipalities.

Ilse, being a mother of 4, also shared her experiences with her children. She pointed out a very important thing from her experience and research, namely that it's parents not teachers who have an impact on digital behaviour. This is something we have known, it is part of being the most impacting educators, but on the one hand we have to keep it in mind and be conscious about our own screen time and online behaviour, on the other hand we can always use it as a reference when our role as primary educator is not acknowledged by policy or teachers.

The conference ended with an interesting interactive session called a Fishbowl, where participants of the plenary had the opportunity to reflect on statements, mostly ones often occurring in the media and some of them with little or no truth (eg. they are planning to replace the teaching of handwriting with typing in Finnish schools), as well as each other’s points of view. There has been some debate about early introduction of digital devices, and a major debate on BYOD (Bring Your Own Device) policies in schools. The latter is an important topic from a parents’ point of view. While children usually use their own equipment (pencils, exercise books, sports outfit, etc.) in school in general, use of their own devices is one of the most often violated rights, especially when the school tries to take the devices away from them. The argument that BYOD may prevent some students with difficult financial backgrounds from being included is becoming obsolete as devices’ prices are comparable to that of a pair of shoes. While BYOD is preferred by parents to be able to follow what is happening in school, and digital devices have become very personal items, we need equitable measures in place to help those families that cannot afford to buy these devices, like it happened in the Magellan Project in Portugal.
Posted by Paddington at 3:40 PM