Conference on the EU Pillar of Social Rights 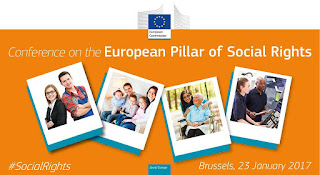 The European Commission organised an high level conference following the adoption of a report on the European Pillar of Social Rights in Brussels on 23 January 2017. The event was designed to highlight the commitment of Jean-Claude Juncker to establishing the Social Pillar of the EU, or more precisely of the Euro Zone for the time being. Social Platform members, including EPA were invited, but were offered little space, for example there were only representatives of other social partners, employers and trade unions in the closing panel. However, the commitment was made absolutely clear by the fact that 9 EU Commissioners, Members of the European Parliament, leaders of the European Economic and Social Committee (EESC), the Committee of Regions (CoR), UNESCO, OECD, the European Central Bank and several national ministers attended and contributed to the event that concluded with the first public speech by the new President of the European Parliament, Antonio Tajani and President of the European Commission, Jean-Claude Juncker.

At this really high-level event everybody emphasised the importance of Europe becoming the top performer both in economy and social protection, both being powerful tools to fight populism, radicalisation and xenophobia. Several stakeholders, including civil society organisations, EPA being one of them contributed to the public consultation on the Social Pillar, we actually raised our concerns with regards to education, child care and reconciliation of work and family life, but we are yet to see if our voice had been heard. It is clearly a ground for concern that guarantees and common measures introduced will only give social protection to people in the Euro Zone, making a further step towards a Europe where not all citizens are treated equal. It is important to prepare for tensions created by this being it between countries or against EU citizens coming to other countries, a clear factor in Brexit for example.

In her opening address Commissioner Thyssen emphasised the social and economic policy are not separate, they should be tackled together to arrive to a social market economy in Europe. The Minister of Education and Employment of Malta, representing the present Presidency of the EU raised his voice for listening to kitchen table politics, the real problems people are facing, as this is what populists do and succeed as a result of. If those who still believe in the European project listen to this and manage to translate it into hope, the current processes can be turned back. He also called the attention to the fact that we are dealing with complex realities, that need a multi-angle approach to ensure we offer solutions to everyone. The representatives of the EESC and the CoR called the attention to the role of civil society and the fact that the EU is facing a solidarity crisis that can only be solved on a community basis. Civil society voice, however, was given little ground, the event was dominated by institutions and the traditional social partners, employers and trade unions.

The format of the conference did not offer possibilities for discussion, but there were a number of topics raised by speakers, sometimes contradicting each other with regards to the desired solutions. We have heard about skills development and lifelong learning, entrepreneurship, new forms of employment, digitalisation and its effects, especially the narrowing of the labour market, migration, augmented knowledge, minimum income. While the new president of the European Parliament, Antonio Tajani stated in his speech that having a job is the way to freedom and dignity (somewhat following the tradition of ‘Arbeit macht Frei’), institutions and social partners have offered other solutions, too, that are more in line with the notion of a social Europe.
Jean-Claude Juncker’s closing remarks gave special weight to the event. He reminded everybody that the social dimension has been present in the EU ever since the single market had been created in the time of Jacques Delors’ EC Presidency. He found the Social Pillar important ever since he became President, but the Investment Plan had priority in the time of economic recovery after the crisis, and it worked. He closed the conference promising that his plan for the Social Pillar will also work, but only in the Euro Zone for the next few years.

You can read the official EC press release about the event here.
Posted by Paddington at 6:30 PM