The Luxembourgish Presidency’s education programme was started with a large symposium on preventing ESL and promoting school success in Europe on 9th and 10th July. Throughout the event the importance of parents was highlighted and the participants have discussed parental involvement in depth. Given this framework EPA was honoured to be part of the closing panel and reflect on the key messages and recommendations coming from workshops of experts, together with representatives of ESHA, ETUCE, OBESSU, EYF and also a high level representative of the European Commission. The importance of the event was very clear from the fact that is was opened jointly by Commissioner Tibor Navracsics and the Luxembourgish Minister of Education, Claude Meisch.


The conference started with the official greetings emphasising the importance of ESL prevention in EU policy. The outcomes of the former Thematic Working Group on ESL Prevention, former EPA President Johannes Theiner was a member of, was shown in a 10-minute video, including ESL statistics and personal messages on the issue from all group members.

The formal opening was followed by keynote presentations. The first speaker, Professor Francois Dubet (link in French), French sociologist gave a very intriguing presentation on why early school leaving became an issue that helped everybody to shift perspectives by highlighting some interesting facts, like that migrant workers are often seeked by employers for their lack of qualifications. He mentioned that he finds the ‘religious belief in schools’ and the ‘ultimate good of qualifications’ a biasing factor. It is a problem that the lack of qualifications became a stigma all over the EU, having a qualification is considered a sign of normality. It resulted in a school inflation caused by good intentions. Society thinks that schools are there to offer equal opportunities and failure is wrongly considered to the be students’ fault, resulting in the loss of self-esteem and devaluation. In his view a minimum of one third of all student are to be considered drop-outs, the ones not paying attention at school. This most often results in either leaving and not taking part at all, or aggression and physical violence against the school. He also called the attention of the audience to the very important fact that we see a distorted picture of ESL as those dropping out at third level (university or post-secondary) are not part of the review. He also talked about the motivation crisis that can be experienced at schools, namely that the motivation in teachers and middle class families are not successfully transferred to low SES families, thus they often have no push even to get up in the morning. He used the notion of a mirage for the usefulness of education that appears for children when pushed from primary to secondary and then on to tertiary education. He shares our concerns for the contents of curricula mentioning that today information is outside of schools, real life is also outside of schools, so many students feel no point in attending. It means that for a future society, school motivation has to change immediately. He compared today’s schools to churches saying that we similarly need them, but most people do not believe in them anymore. He also underlined the importance of society in helping its members to find their place, today there is too much belief in the role of the individual. He finished his presentation by saying that we should think about how we could help people instead of paralysing them by their not fitting the system. 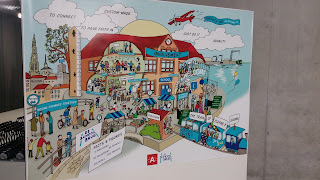 Erna Nairz-Wirth from the University of Vienna presented the outcomes of a longitudinal study done with students at risk of ESL. The full report is available in German here. In her presentation she talked about the bad consequences of dropping out, namely disorientation, stigmatisation, loss of the sense of time, unemployment, social, cultural and economic exclusion, psychological strain and escapism. When presenting the possible preventive measure with regards to the different functions of schooling (qualification, integration and selection/allocation), she presented parental involvement and an important integration factor.

Before the symposium participants broke up to six workshops, Sophie Beernaerts, Head of Unit School and Educators, Multilingualism at DG EAC outlined the framework of the Commissions activities in the field of ESL prevention. The new Thematic Working Group was set up to elaborate on schools and stakeholders role in ESL prevention without involving the relevant groups upon the wish of governments. The Commission’s civil servants have tried to push for a way of involving stakeholders in the process in an alternative way, but it has not worked out yet.

The symposium then broke up to continue the discussion in six working groups on the topics of national ESL strategies, diversity, studies on ESL with different perspectives, promoting smooth educational pathways, NEETs, and parental involvement and community participation. I was invited to participate at the last one for obvious reasons. Pedro Cunha, representing the Portuguese Ministry of Education started his short presentation with calling everybody’s attention to the fact that parents are the primary educators of their children (EPA’s core message) and urged for s shift from seeing school as a service to seeing it as a resource. He emphasised the importance working with and not for parents and treating them as equals. Substantial reference was made to the Includ-ED project lead by Ramón Flecha. Four more short presentations were followed by a lively discussion on the role, intention and motivation of parents, the role of local communities, motivation of students, homework, parental training, early intervention, professionalization and the need for individual support resulting in 10 key messages in the fields of prevention, intervention and compensation.  The local presentation by Gilbert Pregno concluded in a message on the importance of investing in parenthood.

The panel discussion at the end showed that different stakeholders have visions on the topic complementing each other. The panel itself showed how much stakeholders can help each other in their respective roles in education by good cooperation.

Participants had the opportunity to visit the emblematic village of Schengen.

Posted by Paddington at 7:32 PM