Council of Europe: 24th Meeting of the Standing Conference of Ministers of Education in Helsinki

EPA's President was invited to join the delegation of INGO (Conference of International Non-Governmental Organisations) at this conference.

The programme started with a visit at Hiidenkivi compulsory school - one of the "miracolous" Finnish schools to win any PISA-like contest. The vice-principal introduced the school which was only built 9 years ago according to a quite modern pedagogic concepts. every three classrooms arranged around a public area with big glass windows so that the grouped romoms and the corridor area could be integrated to a co-ordinated learning process of several small sub-groups.

The school is characterised as a neighbourhood school having a mixed polulation of students representing a big variety of family backgrounds exceeding the Finnish average by far. According to the presentation Finland starts to change the population profile by immigration having been very middle-class dominated during the last decades.

65 teachers educate 755 pupils from age 7 to 16 (grade 1 to 9). 11 % of the children are accounted as special needs students (more than a dislexia or ADHD diagnosis is required to have this status). 13 % have no native Finnish background (mother tongue).The school offers inclusive education - all pupils are tought together, but individual learning is provided whenever necessary. Typically two teachers are co-teaching in a classroom (present at the same time) which reduces the need for taking individual pupils out for individual tutoring.

The school focuses on teaching learning skills rather than delivering subject content.

Literally the schools representative said that ".. the Finnish schools are threatened by increasing diversity".

The schools have available a nurse, a consulter, a school psychologist and a special education teacher. This team is operating in a coordinated way and meets weekly. Students can approach either of the servce providers on request, but they act in a coordinated way.

When asked for parental participation there was a lot of parental tasks mentioned none of which deserved the word participation. There is a school board where a student representative and parents are represented but no clear decisive powers were mentioned.

According to the financial regulations schools have to decide whether to appoint more good "qualified" teachers with a higher salary or just ordinary teachers. This differentiation is based on agreements with the teachers' trade union.

Surprisingly there are no compulsory national examinations or central tests prior to the final examination. Most strikingly the Finnish system is based on trust more than on evidence of quality outcome. Fins were rather unaware of the superior performance of their system when PISA-results were first published.

The status and recognition of teachers as well as of education are high.

Though it seems strange to dedicate a paragraph to lunch this was a very enriching part of the visit and deserves being highlighted. We had lunch at the school cantine having the same food as the school pupils who came in when we were about to finish our meal. We learned that the economic background was to prepare a meal for 80 cents per student. We could choose from several salads, have potatoes and fish sticks or a vegetarian main dish. Water, juice or milk are free to drink.

Tutoring in the low grades is a non-compulsory subject lesson. The girl was not really aware when I asked about the big responsibility she took in this task.

I also talked to the school concellor. She works as a teacher part time and has dedicated lessons for councelling. Good contact with another counceller and the other supporting staff ansures consistency of support services. Studenst can contact her on their own will to get advice and support. But the councelling can also be triggered by other teachers or support staff if there is evidence for n intervention  reuired.

Overall the school community seems to be linked together by bridges of trust and there is little need of contracts and forml regulation.

In the opening of the conference the theme was outlined by different speakers representing the Council of Europe (CoE). It was pronounced that education has to go beyond employability. The special responsible roles of parents, teachers, school leaders as well as pupils/students was pointed out.

Governance was set as a crucial aspect of a democratic system. The observation was expressed that the current crisis not only impacts on economy but at the same time changes in democratic attitude is observed. There is a demand for ongoing social dialogue on the basis of honesty and truth.

The draft suggestion to be approved as the declation of the conference tackles the question of "Quality of Education". The most relevant aspect on the basis of the Council of Europe's view is Equality. Every learner should develop as a self confident student. This requires the best teachers to get out the best of the system and the learners.But there is not only the question of top performing students. Care has to be taken for support of weaker learners.

Finland's Minister of education pointed out that equality in education needs continuously to be nurtured. The main principles of CoE should be taken into account during the discussion. These are human rights, democracy and the rule of law.


Andorra is currently holding the Presidency at the CoE and decided to focus on education. Andorra's representation introduced their motives. This key topic will also be followed up during the followin presidency periods of Armenia and Austria. On behalf of Andorra the theme was directed towards the involvement of families. The needs of working parents should be respected to build up trust between teachers and parents.
Teachers, parents and students should gain the ownership of ntheir own educational system. (comment: This is exactly what the European Citizens' Initiative MEET claims.)
Strengthening the autonomy of local and regional authorities is one intention to empower them to fight corruption and fraud.

1866: establishment of a national school system

1968: school reform; introduction of a nine year compulsory school starting at the age of seven

Astonishment by the success in international surveys

Basic principles of the Finnish system:

Successful school needs the cooperation with parents and needs to be based on the legacy of goodf learning. 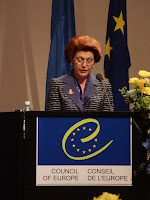 EU Commissioner Androulla Vassiliou participated as a guest. She underpinned the importance of education among the top policy priorities of the European Union. Among the EU2020 flagship initiatives are the fight against Early School Leaving (ESL) as well as the increase of Tertiary Education Attainment.

The Commission's communication "Rethinking Education" released in November 2012 and approved by the Council of Ministers in February 2013 states the priorities and potential impact of education in times of austerity and educational crisis.

A new tool was created and the member states accepted to receive country specific recommendations for further improvement and development of their education systems.

According to the commission's understandning quality of education is quite uneven in many member states. Monetary constraints limit the potential of many countries to decide on better investment into the school system.The Finnish systems proves that quality and efficiency can go together.

Further development of European education systems should build on evidence based decisions and provide continuity by long-term planning.

Turning to new development she mentioned the Alliance for Inclusion. The funding programme "Erasmus for All" replacing the various EAC-funds in the upcoming budget 2014 to 2010 will provide additional means to develop European education and Learning Mobility.

A new framework for multilingualism is ready to sign for three years and marks an area for cooperation between EC and CoE.

Plenary sessions of the conference are strictly regulated. Delegations may only contribute after announcing and only delegation leaders are entiteld to speak,

Not many of these contributions are worth mentioning. They referred to national development realising CoE policies and supported the importance of the conference theme with rather general statements. Only a few of them seem worth to mention:

Germany: Teachers are overchallenged; Schools should not be left alone with diversity of challenges. The cooperation of teaches and parents is crucial; Parents want to be involved. General educational policies should provide the framework and support for this cooperation.
Posted by Unknown at 10:38 PM